Both of the comics below are 1st print copies of Ultimate Fallout #4 (1st appearance of Miles Morales), in the same grade, and their original owners both paid $3.99 for their copies in October of 2011. I pose this question to you: are the two copies below different or the same? (It’s like that old spot-the-differences game! Hint: it has nothing to do with colors, or the artwork.)

If you said “the same” you just made a $6,700 mistake. But that’s not your fault. The Overstreet Price Guide (considered “the Bible” to many comic collectors and dealers) does not differentiate them in their guide as two distinct versions (instead they have just the one entry for the issue number), with just one guided value (with NM- listed at $80 as of guide #49). So there’s no “heads-up” in the guide that would even make you think that your copy might possibly be anything special or different from the rest:

As you can see from the above screenshots, both copies had the same grade assigned by CGC at 9.8 and both were sold around the same time, in June of 2020. So what made one of them worth a full $6,700 more than the other?!?

But it isn’t these words themselves that drive the value difference (although sharp-eyed readers may also notice that the newsstand version of this issue has the neat quirk of being “mis-identified” by its UPC code as the “Black Panther” title), rather, it is the difference in rarity between the two types that Mr. Market is paying attention to.

By 2011 when this book was published, sales of newsstand comics had been on the decline for decades relative to their direct edition counter-parts, and made up only a small fraction of Marvel’s 2011 comic book sales sales — a 2003 BPA audit showed Marvel was down to 4.25% newsstand sales by May of that year and other newsstand rarity discussions and estimates peg Marvel’s newsstand percentage at an even tinier fraction later into the 2000’s (in their last year of newsstand sales in 2013, one insider estimates as low as 1% newsstand).

And there was also a stark contrast in the typical survival characteristics of comics sold via the two different distribution channels: direct edition copies were sold in comic shops where the proprietors handled them with great care (treating them as collectibles) and where the typical buyer was a collector who took great care to preserve them, typically in a plastic bag with a backing board.

Thus, as a general rule, surviving copies of modern age comics in the coveted 9.8 NM/MT grade tier are much more likely to be direct editions, than newsstand copies. Said another way, 9.8 newsstand copies are in much lower supply and thus much harder to find… and market prices all boil down to supply versus demand. I recently studied the newly-released CBCS census and found that as the decades progressed, the 9.8 newsstand census numbers were drastically lower compared to 9.8 direct editions:

But amazingly, even with all the growing newsstand awareness out there, to this day I still see newsstand comics listed on eBay all the time that clearly show a newsstand comic in the listing’s picture, but are not identified as being newsstand books in the title or description (and where the owner quite often prices them for sale at the going rate for the issue number in general). For example I saw a “mis-listed” newsstand copy recently for Venom/Deadpool: What If? #1. In my imagination I draw a mental picture of the owner of the book opening up their copy of the latest Overstreet guide, finding the right page to look up its value, and seeing this:

Here again, there is just the one entry, with NM- at $185 as of guide #49. [Notice the cover price cited at $2.99]. Seeing this guide entry, what would prompt the book’s owner to even think there is a possibility that their copy was anything different or special? And here, I find the guide’s “newsstand omission” even more egregious than in the case of Ultimate Fallout #4, because with this 2011 comic we are also dealing with the newsstand version being a cover price variant of the issue number:

CGC began broadly “breaking out” $3.99 newsstand comics (when price variants of the issue number) on census back in 2016, and so Venom/Deadpool: What If newsstand comics, as price variants, got their own census entry… and after all these years have passed, the grand total number of 9.8 newsstand copies of this book on record at CGC is… drum roll… TWO (as shown in the screenshot below):

Not exactly strong odds of seeing a CGC 9.8 newsstand copy hit the market, with census numbers like these! And unfortunately that’s the case for a great many highly-sought-after newsstand comics. Here’s the $3.99 newsstand census entry for Hulk #1 (2008; 1st Red Hulk), also showing a mere TWO in CGC 9.8:

The other day I looked up the current census for one of the most sought-after 1990’s Spawn newsstand comics that I know of, one which currently stands as the one-and-only example that I know about of a newsstand-exclusive title from one of the big publishers (please tell me if you know of another example!): Spawn/The Savage Dragon #1. And I found that there is just one 9.8 copy on record today:

How can we possibly guesstimate where a 9.8 newsstand copy would sell, with census numbers like these? If the one owner of the 9.8 wants to hold onto it, and the next 9.8 doesn’t appear until far out into the future, then we can kiss any potential near-term 9.8 sales data goodbye!

One way to get at least a ballpark sense of where an elusive 9.8 might sell, is to find the highest grade sale we can, and then find some other book that is “very close” with full sales data all the way out to the 9.8 tier, and then use that information to extrapolate. I’ll walk through what I mean by this. For example, the most recent sale of a CGC graded copy of Spawn/The Savage Dragon #1 was a CGC 9.4: 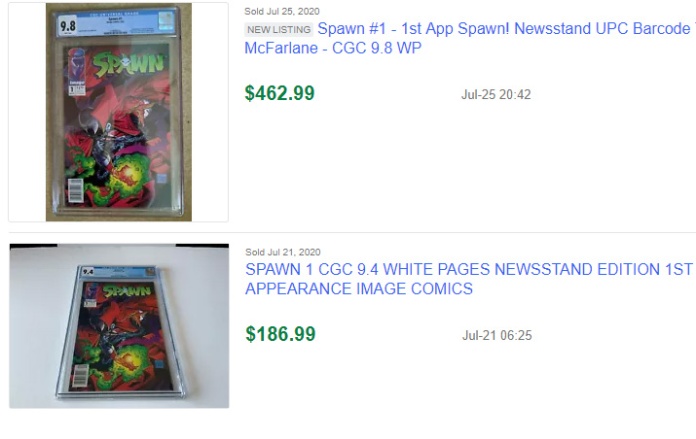 From there, our extrapolation would have the 9.4 Spawn/Savage Dragon #1 (and a 9.8 question mark) on one side of the equation, and the two above Spawn #1 sales on the other side, and then we cross-multiply and divide (462.99 times 298, divided by 186.99) to extrapolate the missing 9.8 number… coming to a rounded $738 for the ballpark value of Spawn/Savage Dragon #1 in CGC 9.8. Who knows what it would actually get in the marketplace, but, this exercise does give us some “rough sense” of the potential — and to show you that this estimation method has the potential to sometimes work very well, suppose it was the Spawn #1 newsstand 9.8 that was missing sales data, suppose we had only the 9.4 sale example for the book, and suppose we chose regular direct edition copies of Spawn #1 as our “something very close” example to use. Here below are recent direct edition sales examples for Spawn #1:

If hypothetically we had been missing the Spawn #1 newsstand 9.8 data, but we did have the $186.99 sale data for the 9.4 newsstand copy, then using the above direct edition sales we could use the same extrapolation trick to compute an estimate: 110 times 186.99, divided by 44, equals (rounded): $467 as our estimate for a 9.8 newsstand copy.

Comparing this extrapolated estimate of $467 against the last actual sale at $463, we didn’t hit an exact bullseye but we’re remarkably on-target! So potentially, this type of extrapolation can give us a sense for where more-elusive newsstand 9.8’s might sell, in cases where sales data is itself elusive (while, naturally, the very fact that they are elusive could argue for the possibility of bidding wars and thus unpredictable market values).

The $8100 sale for Ultimate Fallout #4 is a big newsstand milestone. What other newsstand books are chasing just behind in the horse race? I checked eBay for high recent sales under the “newsstand” keyword, and found a big 1990’s book which (fortunately) has recent CGC 9.8 newsstand sales we can look at: the Harley Quinn key Batman Adventures #12, published in September of 1993 by DC. There are two recent newsstand sales in 9.8, one just happened and the other was back in May for $3000:

This compares to recent (and May) direct edition comparable sales examples I found below at about $1700-1900: 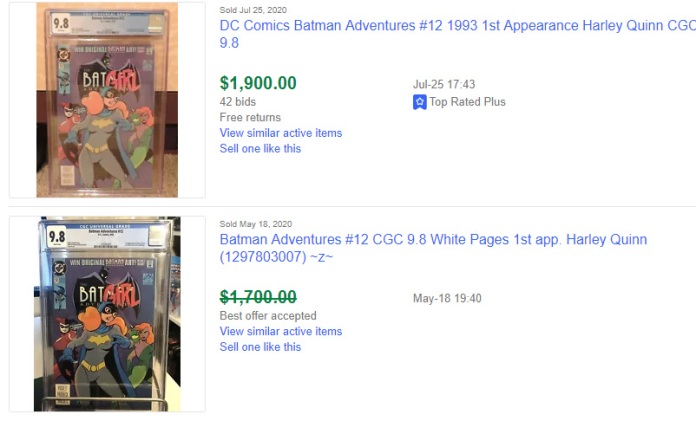 And moving backwards in time into the 1980’s, Amazing Spider-Man #300 has a recent CGC 9.8 newsstand sale at $4500 (by the way, to find the below I had to search with “newstand” [one ‘s’] which is a good trick to know about in order to find newsstand books on the marketplace that others might miss by searching only with the correctly-spelled “newsstand”):

This compares against $2500 as the current going rate for direct editions in 9.8:

Moving even further backwards in time in the 80’s we hit the 1980’s newsstand “cover price variant window” where instead of printing newsstand copies that had prices for both the US and Canada (as, say, “60¢ US, 75¢ CAN” on the whole newsstand print run) like they eventually did, for the period from 10/1982 out to 8/1986 Marvel printed two distinct single-price newsstand batches (other publishers did this too; learn more about CPVs here)! Amazing Spider-Man #238 is one of Marvel’s biggest keys falling into this window, and a 75¢ variant newsstand copy in CGC 9.8 sold back in March for $4650:

Like with the $3.99 price variants, CGC also “breaks out” the 75¢ variants on census on account of the cover price difference, so this census visibility helps us to see what other big 1980’s keys are in the “elusive 9.8” newsstand category. One example that comes to my mind immediately is G.I. Joe, A Real American Hero #21, a raw VF-range copy of which recently sold for $589, and where the number of CGC 9.8 75¢ cover price newsstand copies on record (which they “break out” as “Canadian Price Variant”) is… drum roll… one:

If a CGC 9.8 75¢ variant newsstand copy of that book ever hit the market, it is bound to fetch a huge number at auction. I mentioned that other publishers beyond Marvel have 1980’s newsstand price variants too — from Archie, the big Cheryl Blossom key Archie’s Girls Betty & Veronica #320 has a 75¢ variant that could deliver a huge number at auction in 9.8, and from D.C., Saga of the Swamp Thing #37 has a 95¢ variant. [Here’s a top 50 list for the 1980’s CPVs]. And guess the number of CGC 9.8 copies on record for that Swamp Thing #37 variant? As of today, the answer is zero… a 9.8 for that 95¢ variant newsstand book is still a hypothetical! 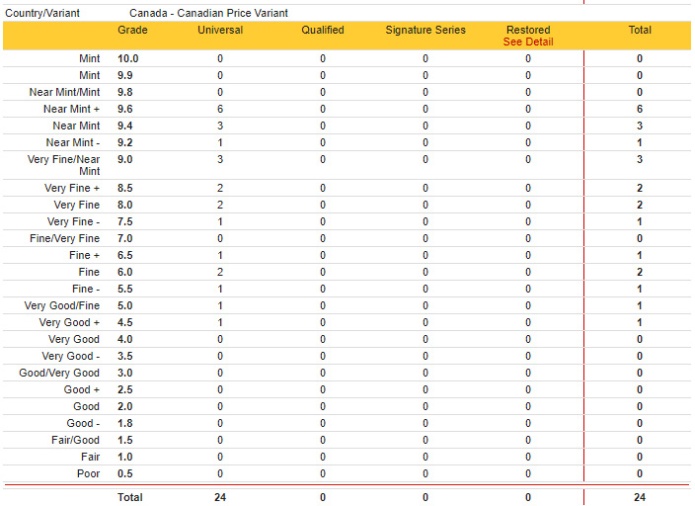 Clearly, for any important copper age or modern comic book you own, it is worth knowing if yours is a newsstand copy, or, just a prevalent direct edition. [Here’s a separate post to read if you need help learning more about how to tell them apart: Comic Book Newsstand Editions: Understanding The Difference]

Can you imagine if you had spent $3.99 in a Barnes & Noble in the year 2011 on a copy of Ultimate Fallout #4, if your copy has survived in NM/MT shape, but in the whole nine years since you bought it you never actually realized that you owned a newsstand copy? You could easily leave $6700 on the table without this knowledge!

Ask yourself this question: for any of the key books you’ve heard me touch upon here today (or any other copper or modern age keys you can think of), that you know you definitely own (somewhere deep in those long boxes of yours), can you answer right now without looking whether it is a direct edition or a newsstand copy you own?

Clearly the newsstand versus direct edition distinction is becoming more and more important to Mr. Market as time passes; it should be equally important to you too!