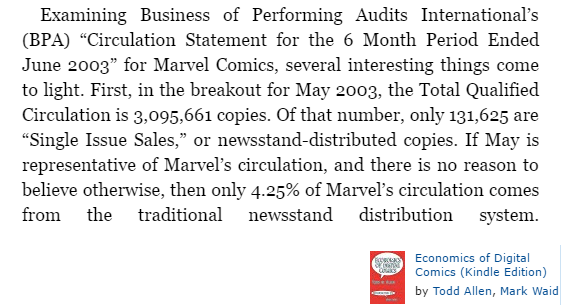 This slide is part of my post entitled
Newsstand Rarity Discussion & Estimates where I have collected quotes and graphics related to the discussion of relative newsstand rarity over the years, compared to direct edition copies. In this slide, I am discussing a quote from the book Economics of Digital Comics by Todd Allen and Mark Waid:

“Examining Business of Performing Audits International’s (BPA) “Circulation Statement for the 6 Month Period Ended June 2003” for Marvel Comics, several interesting things come to light. First, in the breakout for May 2003, the Total Qualified Circulation is 3,095,661 copies. Of that number, only 131,625 are “Single Issue Sales,” or newsstand-distributed copies. If May is representative of Marvel’s circulation, and there is no reason to believe otherwise, then only 4.25% of Marvel’s circulation comes from the traditional newsstand distribution system.”