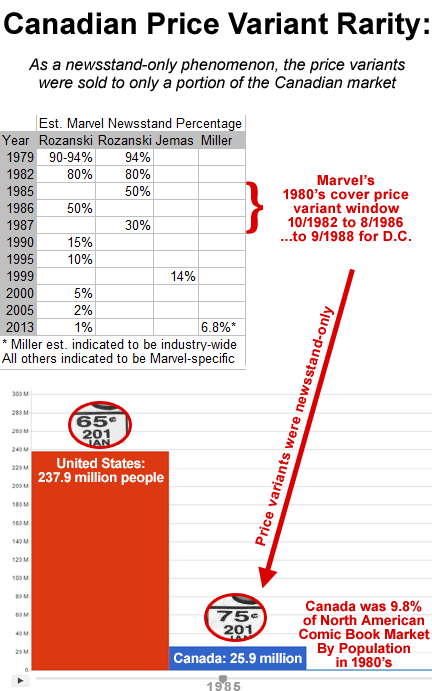 This slide is part of my post entitled
Newsstand Rarity Discussion & Estimates where I have collected quotes and graphics related to the discussion of relative newsstand rarity over the years, compared to direct edition copies. In this slide, I am discussing how the rarity of the Canadian price variants of the 1980’s would have been related to estimated newsstand percentages — this on account of the fact that the price variants were a newsstand-only phenomenon. The direct edition copies across all of North America were the same and carried both US and Canadian prices on them; but the newsstand copies were split into two different batches during a window of time in the 1980’s.

So during that window, the rarity of the cover price variants would be determined by what fraction of the Canadian market for comics was serviced by newsstands, versus serviced by comic shops (where the comic shops sold direct edition, not newsstand copies). By population, Canada was 9.8% of the North American market for comic books as a “starting point” during the cover price variant window, and then that sliver of the market is then divided up between direct edition versus newsstand… with just the newsstand portion receiving the cover price variants which CGC denotes as “Canadian Edition” on their census. At the 50/50 point of division of that 9.8% into newsstand/direct, estimated to be in the 1985/1986 timeframe, we can estimate rarity of 4.9% for the Canadian price variants.