Indeed, as it turns out, for Harvey Giant comics with a regular cover price of 25¢ there have been found 35¢ price variants! These have been determined to have been Type 1A and exclusive to Canada; below is an example indicia photo from the 35¢ variant of Casper’s Ghostland #1:

For many of the other 35¢ variants, single-issue price information is absent from the indicia. Toronto-based researcher extraordinaire Salvatore Miceli, with help from price variant specialist and Overstreet Advisor Bill Alexander, set out to document the Harvey CPVs.

Together they found 974 Harvey issues that would have corresponding 35¢ Canadian Price Variants, from December 1958 to April 1974. Today, below, Sal and Bill share their research with you into these cool 35¢ CPVs, as well as a batch of 75¢ CPVs from 1982 just before Harvey paused/ceased publishing comics, and then a window of “Phase Two” variants following Harvey’s revival (which include the neat 89¢ variants as well as various other cover price points). And they have also covered Harvey’s digests as well.

As you review the lists, if you can help us confirm any of the still-unconfirmed issues, please let us know! For the 75¢ variants from 1982 we have included the list of August and September issues that might have variants but we have yet to spot any from these months as of the time this is being published (if you might have any of the unconfirmed 1982 Harveys we hope you’ll check your collection!).

Harvey had not introduced Direct Editions yet at this point (their reliance purely on newsstand sales may have been a big factor in their decline and ultimate pause/cessation of comic publishing in 1982), making it all the more difficult to predict when CPVs may exist for these issues [later, their “phase two” CPVs do have corresponding direct editions].

But one reason we believe CPVs for the listed 1982 issues could exist out there has to do with a “font change” that Harvey implemented, as pointed out below (Richie Rich and Jackie Jokers #46, 47, and 48 shown):

As you can see, at issue #48 (at right), the font style changes to a different font with a more bold appearance. And for this issue, a 75¢ variant is confirmed to exist:

Thus far we’ve only found 75¢ variants for the final issues from October and December. However, the very same font change is observed for Richie Rich Bank Books #59, for instance, from September: 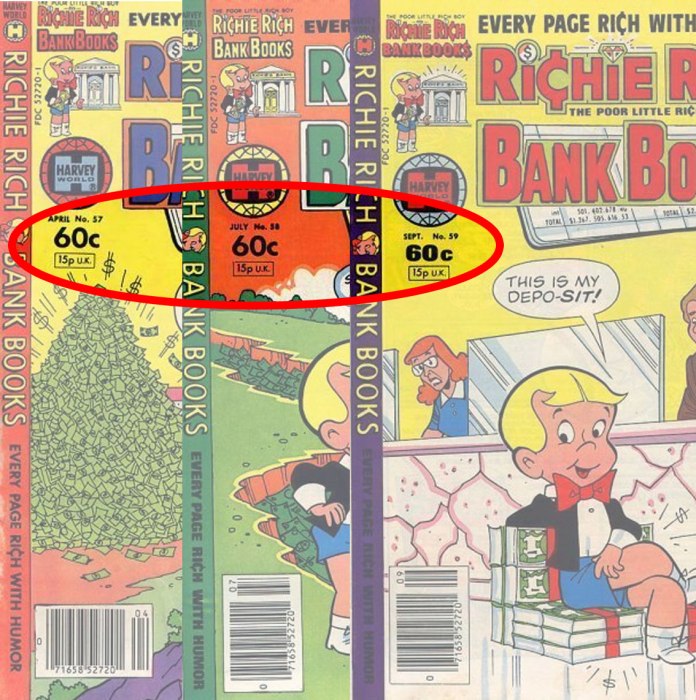 And we do know of Archie Canadian Price Variants from September of 1982, so we cannot rule out the existence of Harvey 75¢ variants too… keep your eyes out, and if you spot any please share the news with us!

A final note: as you peruse the lists, note that we have included the most recent NM- non-variant/baseline issue value, but in reality for the earlier-year 35¢ CPVs, such high grade is unheard of… In his experience hunting for these, Bill points out that finding certain of these older Silver Age variants above VG grade would be like getting struck by lightning. Thus, comparing NM- baseline value may be at best purely theoretical.

In the next section of this post, a sampling of example pictures are presented below by category, and then the Harvey lists follow, grouped together by category: 35¢ CPVs, 75¢ CPVs, “Phase Two” CPVs, and Harvey digests