In this post I will answer the commonly asked question: Why Do Some Comic Books Have Barcodes?

Congratulations on asking one of the most important questions a collector of any comic book published after 1977 should know the answer to…   And yet this is a question I find — even to this day — most collectors have never even thought to ask.  So by asking it, you’ve given yourself a huge advantage:  because not only is the answer critical for a collector to know, but once you have the answer you’ll have an information edge, over the majority of comic book collectors today who still don’t know the answer!

Here’s a popular comic I’ll use as an illustrative example in answering the question, Secret Wars #8.  In the two pictures that follow, one copy has a bar code (aka UPC code or Universal Product Code) located at the bottom left of the cover, while the other copy has a Spider-Man logo in that same spot: 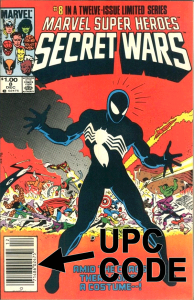 This copy of Secret Wars #8 has a bar code / UPC code on it, at the bottom left corner of the front cover. 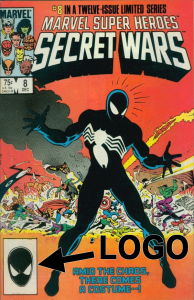 This copy of Secret Wars #8 instead has a Spider-Man logo (“The Spider-Man Rectangle”).

Notice too there is a difference between these two examples at the top left as well, where the price is shown; I’ll zoom in to point out what I mean:

And now here’s the answer!  The example with the barcode / UPC code on it is what’s known as a newsstand edition comic book. It was distributed across the newsstand distribution channel, where copies sat on the stands waiting for readers to make a purchase, and any unsold copies were returned to the publisher for a refund. The other copy, with the Spider-Man Rectangle (a logo with Spidey’s face instead of a bar code) is what’s known as a direct edition comic book.  The “direct” part of that name comes from the fact that comic books of this type came from a second distribution channel, one where copies were direct-sold to specialty comic shops at a large discount to cover price but on a non-returnable basis.
From a comparison of the price boxes, you’ll notice that with the direct edition version, these copies were priced to serve comics shops across the US, UK, and Canada (with all three prices listed out).  The example with the bar code / UPC code sold on a newsstand, had just one price on it. Depending on the publication year, newsstand comics may have both US and Canadian prices on them, or just one price.  You’ll notice the copy I pictured above has a $1.00 cover price, instead of the expected 75 cents — that’s because this particular copy was distributed on newsstands in Canada during a period of time when the currency exchange rate moved enough that Marvel decided to charge a higher price when comics were sold in Canadian dollars. [Extra credit: which country had a smaller population in the year Secret Wars #8 was published, and what does that mean for the relative distribution percentage for these higher priced newsstand copies?  Hint: the population of Canada was roughly the same as that of California at this period in time, and only about half of the Canadian market was serviced by newsstands.]
REPEATING THE INITIAL QUESTION: Why Do Some Comic Books Have Barcodes On Them?

THE ANSWER:  Only the comic books from this era with barcodes on them were returnable; to distinguish returnable newsstand copies from non-returnable direct edition copies, Marvel placed Spider-Man or other logos on direct edition comics of this era, so that they could refuse refund to direct edition copies and accept refunds only for copies with barcodes.  When Marvel first started direct sales, they didn’t think about this carefully enough and all of their comics were part of the same print run… but some sneaky comic shop owners would place orders that were supposed to be non-returnable (at a large discount), and then — because initially the two versions were indistinguishable — those sneaky comic shop owners would return their copies through the newsstand distribution channel and keep the difference!  Marvel quickly caught on to this problem and closed the loophole by making direct edition comics distinguishable from returnable newsstand comics.  And that’s the answer to your question… why some comic books have barcodes!

EXTRA CREDIT:  To this day, most collectors do not know or think about the fact that during a publication window in the 1980’s, a small batch of newsstand copies destined for Canada — an estimated under-7% of the total sold depending on the publication year — had a higher cover price because the currency exchange rate moved and they were priced in Canadian dollars! The bar coded example picture of Secret Wars #8 above is one of them; notice the cover price is not the expected 75 cents but is a full $1.00! Learn more about these interesting Canadian Newsstand Edition cover price variants.
EVEN MORE EXTRA CREDIT:  Depending on the publication year, either newsstand or direct edition copies might be considerably more rare!  When Marvel Comics ended newsstand sales through the last remaining bookstore outlets carrying its newsstand comics in 2013, Marvel’s David Gabriel revealed that Marvel had actually ended newsstand sales to its other newsstand outlets about two years earlier — which would have been circa 2010-2011.  Meanwhile, for 2013 industry context, comics research resource Comichron, has estimated industry-wide 2013 newsstand comic book sales of only $25 million versus comic store orders (direct edition) of $340 million — that works out to an estimated newsstand percentage at 6.8% for 2013, versus direct edition at 93.2%, for the industry, in that last year of Marvel’s newsstand sales…
Industry insider Chuck Rozanski has estimated that Marvel’s newsstand distribution was actually even lower that this industry-wide figure, in its later years of newsstand wind-down.  Below is a table of the estimated newsstand vs. direct edition statistics for Marvel, including those revealed to collectors in 2013 by Rozanski (the same year newsstand distribution channel finally met its demise at Marvel): 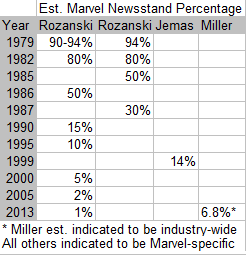 Click here for enlarged version and links to sources; this is a slide from Newsstand Rarity: Discussion & Estimates.

Referring to the chart above, especially in that first and last year where we see such stunning extremes, this is clearly must-know information for collectors… because the publication year makes a huge difference in terms of comparable rarity between the two different versions…  For 1979, the initial year of Marvel’s direct edition sales to comic shops (related: Whitman multi-packs exist from 1977-1979), a collector might prefer direct edition copies because they were only an estimated 6% of the total distribution (over 10% for more popular titles like X-Men).

But as we move down in the table, the 1990-and-on statistics show that newsstand copies represented a drastically lower percentage, especially in those later years for Marvel as they were winding down and ending their newsstand sales (and also with the context of that industry-wide Comichron estimate of just 6.8% newsstand in 2013).  And during this whole time, another consideration is that these two different versions of comics didn’t reach collectors and readers “evenly” by distribution percentage… instead, newsstand comics were concentrated into the hands of readers, whereas direct edition comics, because they were sold in comic shops to “serious collectors,” were concentrated into the hands of collectors who took great care to preserve their condition.  As a result of these two distribution channels “sorting” the market into a mostly-reader group and a mostly-collector group, we see a phenomenon where direct edition comics for any given issue are far more likely to have been preserved and remain in the top condition grades, while newsstand comics of the same issue are much more scarce in those top grades.  As an example to illustrate this disparity, read this: Wolverine Limited Series #1 — Where Are The Newsstand Copies??

Important Note: for later year modern comics, direct edition copies have barcodes too, so it can get confusing.  Know the difference so that you won’t get inadvertently tricked into thinking a bar coded comic is a newsstand comic when it isn’t…  Look closely and you’ll see that the bar codes of direct edition comics will say “direct edition” or “direct sales” somewhere next to the code, while newsstand comics will not — here is a post that points out this difference, with pictures.