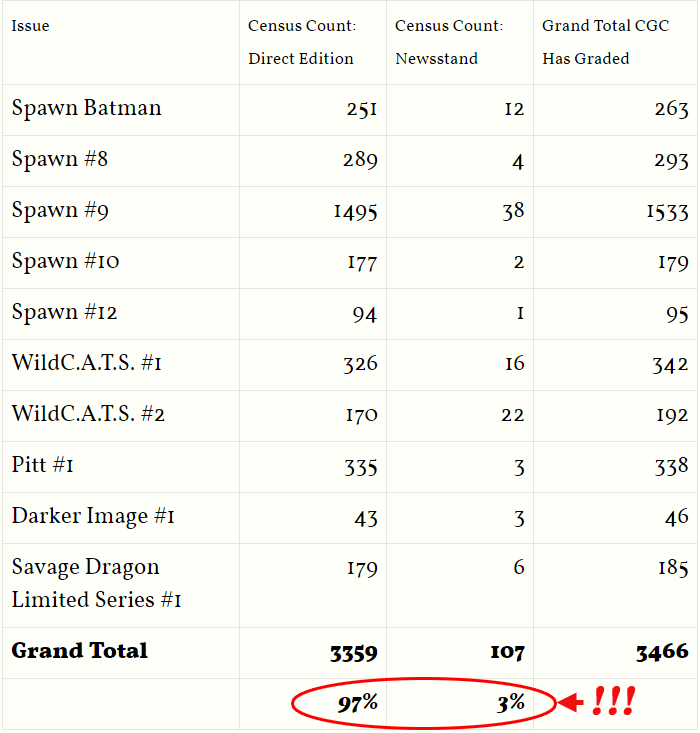 This slide is part of my post entitled
Newsstand Rarity Discussion & Estimates where I have collected quotes and graphics related to the discussion of relative newsstand rarity over the years, compared to direct edition copies. In this slide, I have looked up the current CGC census count for 10 Image Comics titles where I know CGC “breaks out” newsstand copies as distinct variants due to manufacturing differences (such as different paper quality). By having distinct census variants, we can examine how many copies of each type CGC has graded, and what kind of relative rarity shows up. As of this writing in 2016, a total of 3359 direct edition copies have been graded across these ten examples, versus 107 newsstand variants. That works out to 97% direct edition versus 3% newsstand. What’s especially remarkable to me about this is how it compares to the relative rarity ratio we observe on the CGC census when examining 35 cent copies of different titles to 30 cent copies: for Star Wars #1-4 we currently see CGC census relative rarity ratio of 3.2%, 8.5%, 7.8%, and 9.7% for the rare and highly valued 35 cent variants.