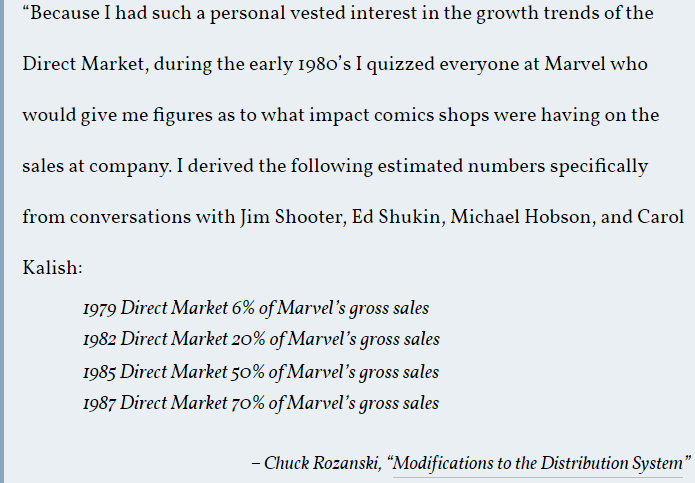 This slide is part of my post entitled
Newsstand Rarity Discussion & Estimates where I have collected quotes and graphics related to the discussion of relative newsstand rarity over the years, compared to direct edition copies. In this slide, I am discussing a quote about 1980’s Marvel newsstand percentages:

— From Modifications to the Distribution System, Chuck Rozanski

What is particularly interesting to me about this quote, is that it reveals Rozanski’s estimated newsstand versus direct edition sales percentages for 1979, 1982, 1985, and 1987. This is one of two Rozanski articles I’ll quote from, the second giving estimates for later years as well. It is particularly interesting to compare these estimates against those others have given, for example the quote that Marvel’s newsstand percentage was 14% when Jemas came on board in 1999, and the estimate by Miller that industry-wide newsstand sales in 2013 were 6.8%. Also interesting is the context of Jim Shooter’s discussion of trying to support the ailing newsstand market with ideas in 1986 that were ultimately shot down by the “brass” in favor of the profitable direct market.