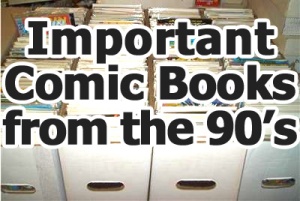 [ Special Note: If you are not already in-the-know about the difference between newsstand and direct edition comics see the following: Comic Book Newsstand Editions: Understanding The Difference ]

The 1990’s were a roller-coaster, starting out with a major “boom” period and then experiencing a “bust” — with Marvel famously declaring bankruptcy at the end of 1996 (they survived on after a restructuring of their debts).

The year 1992 saw the emergence of Image Comics onto the scene.  Some concluded Image was exclusively direct edition, but as it turns out, under the mountain of direct edition copies they sold, there was also a small sliver of copies that were distributed on newsstands — 1% by one insider’s estimate.  You’ll see a lot of CGC-recognized newsstand variants from among Image’s comics, as they quite often were manufactured differently, causing CGC to break them out as distinct from their direct edition counter-parts.

As we enter the 1990’s, direct edition comics made up the vast majority sold, with estimates out there for newsstand rarity percentages of 15% by 1990 and 10-14% by 1999.  We see Marvel experiment with Australian cover price variant newsstand copies during the 90’s.  And at the end of the decade, there is a 1999 decision by Marvel to “walk away” from the newsstand model — this would quickly put the newsstand percentages down to single digits as we enter the 2000’s, setting us up for some more highly interesting newsstand variants (including an entire CGC-recognized “window” when newsstand comics carried higher cover prices than their direct edition counter-parts).

There are many “top lists” out there covering important or “key” comics from the 1990s, but the ones I’ve seen are all either based upon individual judgment calls or the high sale prices observed in the marketplace. Judgment calls are great, but not necessarily comprehensive. Meanwhile, high sale prices could just as easily be reflective of, say, a CGC 10 Gem Mint Signature Series copy signed by Stan Lee, versus reflective of the underlying comic being of any great importance.

One surefire way to “tease out” a list of important comics is to consider how many copies have been sent in to CGC to be graded — the more important the comic, the more likely its owner will want to have it graded and slabbed, right? So by ranking comics simply by the number of copies submitted to CGC — removing any judgment call or sales price information — I’d argue we can get to a pretty good list of important key comics! Of course, there are flaws to this exercise which should be kept in mind: for one thing, this submission data is from one snapshot in time (year-end 2016) and there could be plenty of important comics that aren’t recognized as such until some future development gives them renewed attention. And another flaw is that some very-high-value comics simply didn’t have many copies printed — such rarities would naturally sort themselves off of the bottom of a list like this as well (an example that comes to mind is Spawn/The Savage Dragon #1 from 1996, the existence of which is an incredible circumstance… as a distinct title created as a newsstand exclusive and therefore carrying that ultra-low Image newsstand distribution rarity touched upon earlier).

So please don’t anybody think of these lists as a “rank” of importance or as being an all-encompassing list… all we’re ranking here is the sheer number of copies that have passed through CGC’s doors as of year-end 2016 and presenting the top fifty. That’s it! This data should give us a very interesting list, but this list is no replacement for judgement and no replacement for pricing data — it is simply one more tool for our tool-belt as we study interesting and rare comics like the ones I enjoy writing about on this blog! With that caveat stated, without further ado, here is a list of 50 important comics from the 1990s. [ I’ve also posted more lists of key comic books by year including other decades; special thanks goes to Greg Holland whose research website was the tool that made these pages possible to assemble ].

More Important Comics Of The 1990s: