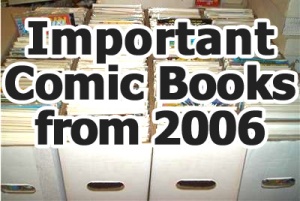 [ Note: for the year prior, a newsstand rarity estimate of 2% exists for Marvel.  If you are not already in-the-know about the difference between newsstand and direct edition comics see the following: Comic Book Newsstand Editions: Understanding The Difference ]

There are two main ways I’ve seen online lists of key comics presented by year: (1) personalized lists based upon judgment calls of what is “key” (thereby omitting any comics the particular writer doesn’t happen to consider key — or doesn’t know about), and (2) lists based upon high sales price data (also a flawed method because high prices can just as easily be caused by a non-key book happening to grade a 10 at CGC).

The top 50 list you’re about to see is neither of those other types.

Instead, to briefly repeat the introduction I gave on the main 2000’s page, the list I’m about to present is essentially “crowd-sourced”… by the crowd of collectors sending comics to CGC. All I’ve done here is to rank the universe of comic books published in 2006, according to how many copies of each issue have passed through CGC’s doors to date to reveal the comics with the highest census counts — that’s it!

This exercise should “tease out” a very interesting list of important and/or key comics from 2006, but this will not necessarily be an all-encompassing list (if very few copies were created for a given key, for example, that restricted supply could keep the count of CGC submissions low even though the comic is very important — this exercise will unfortunately see such comics sort themselves off of the bottom through no fault of their own). So essentially, you should think of this list as just one more tool in your tool-belt of researching key comics from 2006. You can also drill down and see the top 50 Marvel comics of 2006, top 50 D.C. comics of 2006, and more key comic books of 2006 from other publishers.