“It’s been a fun and challenging ride so far, and I think it’s just getting started for Type 1a Variants, so sit back and enjoy the fireworks!”

It all started with a 35 cent price copy of Godzilla #2. The year was 1997, and I knew immediately there was something strange about it…

It all started with a 35 cent price copy of Godzilla #2. The year was 1997, and I knew immediately there was something strange about it because I remember paying 30 cents at a Circle K for my copy in 1977. The book came from a long box of 1970s Marvels I picked up from a wholesaler, a little mid to high-grade inventory. Fortunately, having not yet processed the group into stock, I quickly found four more issues with the “wrong” price. Having previously sold two 35 cent Variants of Star Wars #1, I realized there had to be many more Variants out there, and before long I found some 30 cent Marvel Variants as well. The time had finally come to call Bob Overstreet.

I dialed Gemstone’s number in Baltimore and selected Bob’s extension. In case you’ve never spoken with him, I’d describe Bob as a polite, genial southern gentleman. When his pleasant voice answered, “This is Bob,” I introduced myself and told him I’d been planning on calling him for the past twenty years but had been waiting until I had something important to say. “Well, for God’s sake, what is it?” he asked. I told him I had discovered several hundred Marvel comics that nobody knows about. His response was immediate: “That’s impossible! Marvel is the most heavily-researched comics company ever,” he said. I offered to have proof on his desk the next day. I asked him if I was right, if I could join the team, and he said, “Absolutely.” When I called the next day he was genuinely surprised and I have been an advisor to the Overstreet Guide ever since.

I initially disseminated the existence of Marvel Cover Price Variants in Comic Book Marketplace (CBM) #51(9/97) and #55(1/98), and in an update that appeared in #66(1/99). Three years later all of the Marvel Variants were listed in the Overstreet Guide.

Bob wanted proof of more than the handful I could provide before listing them all. At the time, I had been reading Gemstone’s slick Comic Book Marketplace magazine for several years. Edited by Gary Carter, it was the finest comics publication of its kind, and in my mind remains the best magazine ever published on the subject of comics. I initially disseminated the existence of Marvel Cover Price Variants in Comic Book Marketplace (CBM) #51(9/97) and #55(1/98), and in an update that appeared in #66(1/99). Three years later all of the Marvel Variants were listed in the Overstreet Guide. Completists pursue one of everything, and demand for Direct versus Newsstand Editions, and other Types of Variants, may soon justify individual listings.

Type 1 Variants: Cover Price Test Market Variants with regional or otherwise limited distribution, published simultaneously with standard or “regular” editions. Such Variants exist because publishers want to test the market prior to raising prices. The indicia and all aspects of the book, except for the cover price, are identical to regular editions. Examples include Marvel 30 and 35 cent Variants, and Archie 15 cent Variants, and Charlton 15 cent variants.

Type 1a Variants: Cover Price Variants intended for foreign distribution with limited regional distribution, published simultaneously with standard or “regular” editions. The indicia and all aspects of the book, except for the cover price and sometimes the company logo, are identical to regular U.S. editions. One example is the Marvel Pence Price Variants, with the “Marvel All-Colour Comics” cover banners. Other examples include the Canadian Gold Key and Whitman Cover Price Variants.

There are dozens of additional types of variants I have identified, but for the purposes of this short piece of history, only Type 1 and Type 1a is discussed, as they represent the majority of collectible Variants.

Type 1a Canadian Cover Price Variants from the Bronze Age and Copper Age have been making great headway since my article, A History Of Publisher Experimentation And Variant Comic Books, was published in the Overstreet Comic Book Price Guide (OPG) #40 in 2010. For example, in August 2018, a copy of Amazing Spider-Man#238(3/83) Type 1a Canadian cover price variant sold on Comiclink in CGC 9.6 for a whopping $2300. Until the last couple of years this would have been unthinkable, but when you consider the scarcity differential between standard U.S. editions and their Canadian newsstand cover price variant brothers, which is often far greater in grade, it makes sense. Scarcity and demand drive the comic book market, not just movies, and such books have made the radar of savvy collectors pursuing a new frontier. I predict such Type 1a variants (which exist with multiple publishers, not just DC and Marvel), because of the serious money that will ultimately be involved, will enjoy the same visibility to collectors, listed next to the standard editions in any future viable price guide. It’s always about the money. 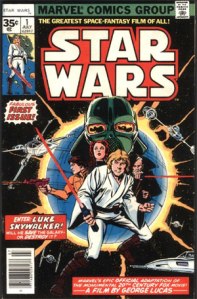 Star Wars #1 35 cent Variant remains the most valuable Bronze Age book, listing at $11000 in raw NM- in the OPG #48. The real story of how this all came together, the process of discovery of the variants, is detailed in CBM #51, #55, and #66, but I’ll share some backstory, some reactions I received from the discovery and some related memories. It took many years for collectors and dealers to accept reality. By the time the dust settled I felt like Copernicus.

At the time I attended the Overstreet Advisors’ meeting in 1999, in Timonium, Maryland, I had no idea it would be the last. Bob commented to me about the whole affair: “I hate these things.” For me it was exciting, flying across the country from Newport, Oregon and meeting almost all of the main dealers in the country, congregated in one place to discuss the values in the Guide! Sounds like fun, doesn’t it? On the first night, Steve Geppi hosted a sweet party and I wandered around looking at all of the Golden Age wonders on the walls and in cases.

At 35 years old, taking part in evaluating the values of the comic book industry for the Guide was a dream come true. I knew I was doing things that many collectors and dealers only dream of, and being an advisor was quite uncommon twenty years ago. The Guide, having been a constant part of my life since I was a kid, commanded a level of respect and reverence that not much else did.

CGC introduced itself as an up-and-coming business that afternoon and made a presentation to all of the advisors. Every dealer present signed up as charter member dealers. CGC did hit a bump in the road, though. After many of us raised concerns about how specifics would be addressed (mine was paper quality), things quickly erupted into laughter when CGC announced they were going to put the Wizard emblem on their holders. Wizard is a joke to Overstreet advisors. CGC was in shock at the response, and said they would think it over! Needless to say, it never happened.

On the second night, I ran into Steve Borock in the bar at the hotel and we started talking comics, strangely enough. Steve is such a passionate collector that if you’ve ever spoken with him you’ll remember the conversation. We chatted about pedigree books, and it was the first time I gave any serious thought to a book’s provenance impacting its value outside of its grade. As we spoke, I graded the same 100 (or so) books that about 70 other dealers graded for a consensus and averaging for CGC to base their grading criteria on, which was an honor. I spent about 90 minutes working on the comics, making sure I was giving each book my best effort. The books ranged from Golden Age to Bronze Age and from grades of Fair/Good 1.5 to VF/NM 9.0, and were loose of their sleeves for ease in grading.

On the third and final day, I made my short presentation on Marvel 30 and 35 cent Type 1 cover price variants to the other dealers. To my surprise, I was treated with mockery and derision. No one there believed what I was telling them, that these books would be some of the most sought after 1970s comics due to scarcity and that prices would skyrocket. I discussed this with Bob Overstreet later and he simply said, “They’re just jealous, Jon, because they didn’t find them first,” which made me feel better. Bob has always been genial and patient in our phone conversations, and his kindness was appreciated.

On the third afternoon as we were all leaving, Bob Overstreet stopped in the parking lot. Well, let’s just say he paused and I paused with him. It’s not like I wasn’t to going to make everything I could out of this trip by passing on another chance to speak with Bob. He looked at me and said, “Someday when I retire I’d like you, or someone like you, to take over the guide.” “Thank you, sir,” was all I could think of to say. We said a few other things but my brain partially disengaged after his statement so I don’t remember, except that I felt like a million bucks.

Some dealers went out of their way to be rude to me, lecturing me on how wrong I was (and how dare I say otherwise). One dealer marginalized me, and my work, in his auction catalog. Another scoffed at the attention I was getting and said it was short-lived insanity. Many other dealers simply but politely disagreed with me, unable to accept that the Variants were not the “same” books. Some others were simply dismissive, although a few of them seemed intrigued. I believe the fact that the dealers had never seen or heard of the Variants before biased them, as something as sizable (as 365 total 30 and 35 cent Variants) was a big surprise and thus hard to accept. They were, after all, the “experts.” I can honestly say I knew the 30 and 35 cent Variants were a big deal the moment I spotted them. The fact that today a select number of them sell for more in grade than most of the “Top 10” Bronze Age books speaks for itself, and this has been true for more than a decade.

It’s been a fun and challenging ride so far, and I think it’s just getting started for Type 1a Variants, so sit back and enjoy the fireworks!