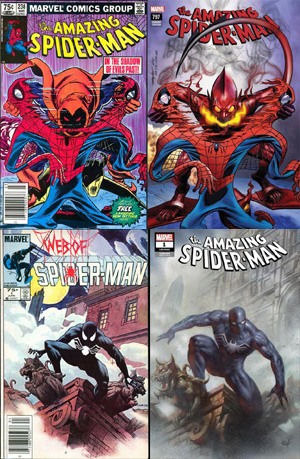 If, like me, you’re a collector who is into cover price variants, then you probably also keep a lot of 75¢ variant keys on your eBay email alert lists… and like me, you may have noticed that recently for Amazing Spider-Man #238 and for Web of Spider-Man #1, there are some really cool cover swipes popping up in our eBay alerts these days! Since these two mega-keys were not originally among the 7 variants I highlighted last year as destined for future classic cover status, and since I keep seeing cover swipes for these two books popping up in my alerts these days, I’ve been wanting to make a post to highlight them.  So here goes! 🙂

The “Cover Swipe Test” — a concept I talked about in a post last year entitled 7 Variants Destined For Future Classic Cover Status — is the idea that for a past important comic book cover, being cover swiped is an excellent test of being deserving of future Classic Cover status down the road once the comic has sufficiently aged that the comic book “authorities” of the future will feel it has grown old enough to officially deem it a Classic Cover.

The “cover swipe test” is like a form of “peer review” — other creators (or even the original creators themselves) are essentially teaching us just how important that past comic cover is… i.e. it is so great, so important, and/or so absolutely classic, that they decided to pay homage to it by putting their own “twist” on the original… their own twist on the classic! What better “future classic cover test” can there be than that?!

So when we see new cover swipes coming out, we should also be thinking about collecting the original as a future Classic Cover contender; and when hunting down our copy of the original, it is especially interesting when there is a more-rare cover price variant of the issue that we can collect as our preference, as is the case for the two comics I am going to highlight today: Amazing Spider-Man #238 (published by Marvel in March of 1983), and Web of Spider-Man #1 (published by Marvel in April of 1985)!

The Type 1A 75¢ cover price variant for ASM #238 is among those variants that “needs no introduction” — it takes the #1 spot in the top 50 variants of our 2018 guide and has featured prominently in many of my past posts (including this one linked to here which served as my 2018 “advisor note” on the issue), the book features the key first appearance of Hobgoblin, and because it originally came with Tattooz which many newsstand-goers tore out and used, finding high grade copies of the variant is exceptionally difficult. The original cover is credited to the team of John Romita Sr. and John Romita Jr. The cover swipes I’ve lately been seeing pop up in my email alerts these days are shown below: the Amazing Spider-Man #797 and #800 variant covers by Mike Mayhew:

While ASM #238 topped our 2018 top 50 list, Web of Spider-Man #1 meanwhile came in towards the bottom of the list at only the #49 spot — and in his advisor note, Angelo Virone commented: “Undervalued in my opinion”… And I must agree: Web of Spider-Man #1 is too important a comic to be valued as low as it currently is in the marketplace!

The absolutely gorgeous painted cover by Charles Vess isn’t the only thing this book has going for it. In the first appearances department, this book gets credit as the 1st Appearance of the Vulturions. And as Doug Sulipa notes, the issue is the fifth appearance of Spider-Man in the black alien costume. 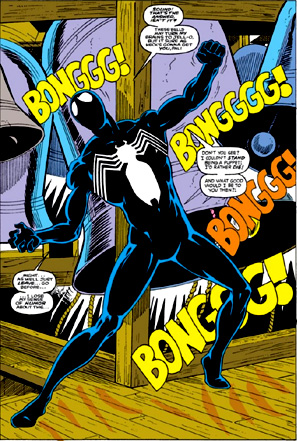 Sound! That’s the answer, isn’t it?

The more I research this issue, the more I’ve been learning just how darn important this book really is to the Venom story-line: We learn in this book — for the first time — that the symbiote does not trigger Spidey’s spider senses, and we also see Peter fighting the symbiote with sound by using the sound from large church bells to break the bond with symbiote. In this 2014 article by Mark Ginocchio, Mark does a great job of exploring the issue and its importance, and concludes about the issue that “Web of #1 might be the most historically significant No. 1 Spider-Man book since ASM #1 in 1963.”

Below side by side are the original cover by Charles Vess (75¢ variant pictured), and the new cover swipe we’ve been seeing pop up in our watchlists: Amazing Spider-Man #1 variant cover by Lucio Parrillo.

The cover of Web of Spider-Man #1 by Charles Vess falls under a category of comic book covers that I’m quite fond of: painted covers. Some of the comic book covers we see out there which are derived from paintings by artists, are already classic works of art to my way of thinking, whether those covers are the subject of future cover swipes or not. For the cover of Web of Spider-Man #1 to be a painted cover and then to also pass the Cover Swipe Test makes that cover all the more important as a Classic.

Vess was responsible for some other phenomenal painted covers in the 80’s too, and while we’re on the subject you simply must see his painted cover for Amazing Spider-Man #261 (2/1985) if you haven’t yet seen it… It is one of my favorite all-time Spider-Man covers, and also happens to feature Hobgoblin:

Isn’t that a phenomenal painted cover?! It is interesting to think about the juxtaposition between the 75¢ cover priced newsstand copies of something like ASM #261 above, from the 1980’s price variant window with its incredible “natural rarity” (as walked through here with explanatory graphics), against today’s “1:something” retailer incentive variants with their artificially manufactured rarity (i.e. with print run restricted on purpose to create a more-rare version of the issue number).

Every single copy sold of today’s incentive variants are treated from day one as a collectible to preserve and protect (the buyers of such incentive variants are paying through the nose to own them, so to then take the book home and read it for enjoyment would be equivalent to setting fire to a pile of cash for fun — not going to happen). So excepting accidental loss/damage, every single copy produced of a modern-day retailer incentive variant is going to survive and its owner will strive to preserve it in tip-top shape.

Meanwhile, a newsstand buyer from the 1980’s who purchased the above Amazing Spider-Man #261 cover price variant, didn’t know they had just landed something special, didn’t know it was dramatically more rare than the 60¢ newsstand copies or the prevalent direct edition copies sold in comic shops (and didn’t even think about there being a difference between newsstand vs. direct edition comics as distinct first-print types produced for two different distribution channels). And that original buyer of the above 75¢ variant paid seventy five cents for it on the newsstand. That’s an entertainment purchase where the vast majority of newsstand-goers were buying that comic to read it, and where preserving it in high grade was the last thing on their minds… unless they happened to be a collector buying from newsstands — and so to land a high-grade copy with 75¢ cover price we need to find one originally purchased by that collector, who was the exception and not the norm of typical newsstand-goers.

In my post last year on the subject of Classic Covers and the “Cover Swipe Test”, one of the comics I included was Alpha Flight #3, which I dubbed a Classic Cover Contender because John Byrne has told us it is his personal favorite of all the covers he’s ever created.

Picture this scenario: Suppose you and I were tasked with updating a list of classic covers to include more modern comic books. Upon hearing John Byrne tell us his personal favorite cover that he’s ever created is Alpha Flight #3, how would we treat that input? Would we dare say “thanks anyway but we disagree” and exclude his personal favorite cover? Not a chance! That comic would go right onto our list, to mark a key work from a key superstar. Thus, Alpha Flight #3 is a clear future classic cover contender.

But as relates to the Cover Swipe Test, is Alpha Flight #3 actually swipeable? Leave it to Byrne to come up with a cover so cool, so interesting, but also so structurally complicated and fascinating, that I wonder if this particular cover is even swipeable by another artist? It would be a real challenge for sure, for another artist to swipe, and I’d love to see it attempted! Any artists out there up for the challenge? The mostly-black-and-white artwork, and the yellow title with red outline remind me of another black-and-white Byrne cover that I’d love to see another artist pay homage to with a cover swipe: Spectacular Spider-Man #101! 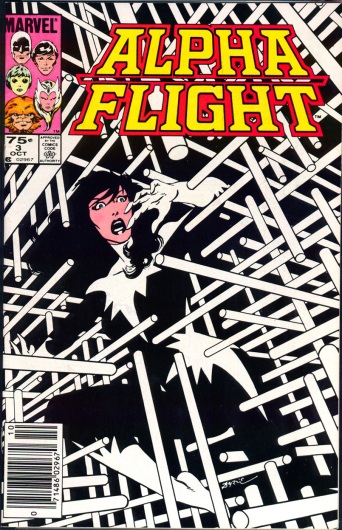 Before I bring this post to a close, while we’re on the subject of John Byrne covers I should also show you a great John Byrne cover from an issue that landed in our 2018 guide’s top 50 — The Thing #1. Looking over the top fifty, this is the only John Byrne cover I notice among books that made that highest-value toplist, coming in at #44. Doug Sulipa’s advisor note for the issue is as follows: “JOHN BYRNE cover art & story; ORIGIN and LIFE HISTORY of BEN GRIMM, from Yancy Street Gang Days, College Football Days, First Meeting with Reed Richards & the Rocket that Made him into the THING of the Fantastic Four.” The cover strikes me as truly iconic and a great cover swipe candidate. 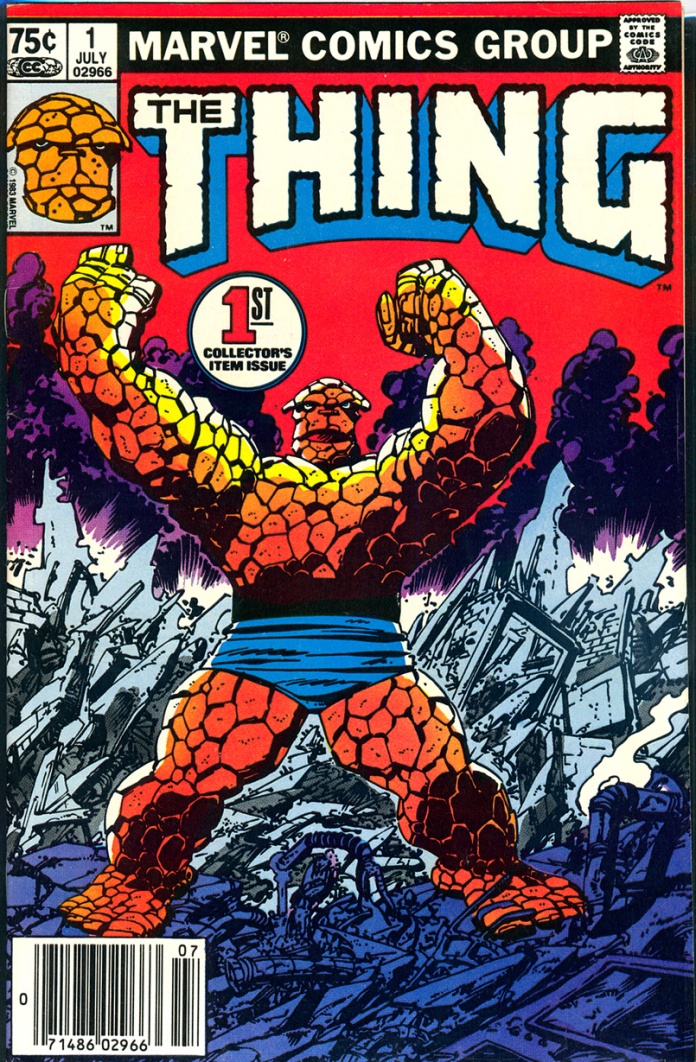 The idea of collecting future “Classic Cover” issues today — i.e. before the comic book authorities of tomorrow are using that phrase on labels, is an intriguing collecting angle that I for one really enjoy thinking about! The inclusion of the “Classic Cover” phrase on CGC labels of older comics surely brings more value to those books than they would have without that designation, but today’s grading companies stop applying that phrase with books that are “too recent” but clearly will deserve that designation in the future.

So for more modern books we collectors are really on our own to determine which comics will be dubbed “Classic Cover” comics in the future… But we’re not really on our own at all! Because fortunately, through their words and actions — actions like paying homage to past important covers — comic book creators are teaching us which more-modern comics are eventually destined to be the Classic Cover books of tomorrow. And when the universe of Classic Cover contenders intersects with the universe of Type 1A cover price variants, that makes for an interesting collecting category indeed!! 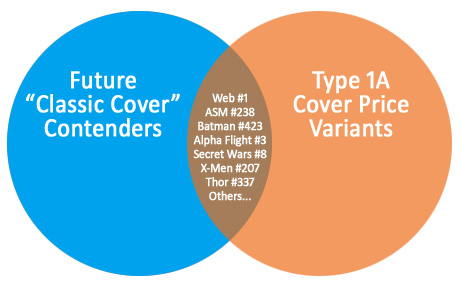