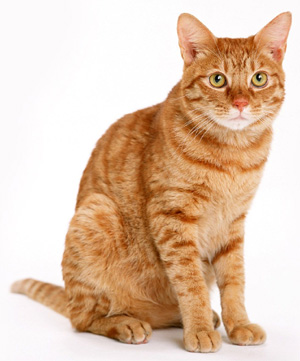 80% of orange cats are male; 20% are female. This disparity in rarity among cats leads to the frequently asked question: “Are ALL orange cats male?”

Taking my family to the zoo is always a fun outing, and during the car ride today we were listening to a podcast answering frequently asked questions about animals — specifically, cats… And one caller asked: “Is it true that all orange cats are male? And if so, why?”

The expert who gave the answer explained that — to paraphrase — there is a gene for orange coat color that a cat can get from its parents, and in the case of boy cats they only need the gene from either parent… but for a girl cat to have an orange coat they’d need that gene from both parents.  As a result, 4 out of every 5 orange cats are boys. Four out of five = eight out of ten = 80% boys.

So the underlying facts about what drives the phenomenon (the genetics), leads to the knowledge that roughly 80% of all orange cats should be male, while roughly 20% should be female.

Equally fascinating to me about this explanation, was how the 80% prevalence of males was “overwhelming enough” that it has driven so many people to wonder whether all orange cats are really male…  I later started typing a search into Google and after typing the words “are all orange” a suggestion box popped up below the search field, where both the first and the second auto-suggestion show that this truly is a very frequently asked question indeed!

Sometimes when I’ve gotten a number in my head — like 80% of orange cats being male — it will trigger a related thought.  And what came to my mind was something I’d just read this past week:  I’d read Jon McClure’s market report that touched upon Canadian Price Variants.  Here’s the specific quote that came to my mind:

“Type 1a Canadian cover price variants are now routinely selling for 150-400% Guide, and select CGC high grade key issues of popular characters have been bringing 400-2000% of guide; such books are at least 10 times scarcer due to low print runs. Canada’s population is about 10% of the US population, thus about 10% of all Print Runs are Canadian copies, however roughly 80% of the surviving copies are Direct Editions, bought in comic shops and saved by collectors. Most of the Newsstand editions were bought by non-collecting readers, with a much lower survival rate, and most are well read FA/G to FN/VF copies. Most VF/NM or better Type 1a Canadian Newsstand Cover Price Variants are 50 to 250 times Scarcer than their US Direct Market counterparts in high grade; randomly checking the CGC census will substantiate this for most items.”

So by McClure’s estimate here, surviving Direct Editions among 1980’s comics at 80% of copies are like males among orange cats…  And our Canadian price variant comics as newsstand-exclusives are among the remaining rare 20%.  This would already be an extreme disparity if it was 20% of all 1980’s comics that we were talking about when it came to Canadian price variant rarity… but that’s not what we’re dealing with (20% is just the newsstand rarity alone)…

What’s so incredible about the rarity of 1980’s Marvel and DC Canadian price variants is how we’ve got to intersect that 20% fraction with another fraction: the fraction of comics sold in Canada.  So we’re not just dealing with female orange cats from North America, we’re dealing with female orange cats from Canada.  Which is a much smaller number of cats!  Because by market size using population numbers as a guidepost, Canada comes in at ~10% of the North American market for comic books.  So what McClure is teaching us, is that the surviving Canadian price variants are 20% of 10%. For a bottom line of… 2% of surviving copies (in “modern day variant terms” that’s 1-in-50).  A number which brings me to one last quote I want to share for today, but more of a philosophical one:

“Don’t miss the forest for the trees.”

My very first blog post was back in 2011, and over the span of these past six years I’ve seen an interesting spectrum of collector reactions to discussions like Jon McClure’s quote that I shared above, when it comes to a rarity number like 2%.  On the one hand, there are those collectors who see the forest … they get the “big picture” and nail the take-away. On the other hand, there are some who get so focused on the trees that they miss the bigger picture.  For example such a person might read the quote from McClure that I shared above and get caught up in some detail — some tree — like for instance even though Canada’s population works out to ~10% when we look at the World Bank and US Census numbers from the 1980’s, we don’t actually know the per-capita comic book consumption difference… In other words, we don’t know if Canadian citizens on average consumed more or fewer (or equal) comic books, versus US citizens.  Such a tree-focused reader might also stop at the 80% number and ask in outrage: how could Jon McClure possibly know that the figure is 80% of surviving copies that are Direct Editions?  Why not 79%? Or 81%? Or 70%? Or 90%?

Two layers of “Female Orange Cat Level (Or More) Rarity” before we get to surviving Canadian price variants as a percentage of a given issue!

But the bottom line with Canadian price variants is that they’re not just at female-orange-cat-level-rarity, they are a layer beyond that — at female-orange-cat-level-rarity-squared — because of the second layer involved: we’ve got newsstand rarity and population-center-size-driven rarity.  It is the intersection of those two layers that drive us to the kind of survivorship numbers we’re dealing with among these rare comics.

As we pencil out each of these pies into slices (the newsstand/direct-edition pie and the USA/Canada pie), there’s no way we’re going to be able to size the slices with a surgical level of precision.  But the situation is reminiscent of the famous quote from the movie Jerry Maguire, I’m sure you know the one I mean and can picture the scene: “You had me at hello.”  With Canadian price variants, the take-away that collectors who see the forest should have is: “You had me at dramatically more rare but sometimes available for regular direct-edition-price.”

Long-time readers know what I mean by that last sentence but I’ll explain further for anyone who landed here that may not be a regular reader: Much like the early days of 35 cent variant awareness in the hobby, we’re currently amidst a newsstand awareness environment in the hobby where not all owners of 1980’s (and later) comics know anything beyond the title and issue number that they own.  The Overstreet price guide does not yet “break out” newsstand versus direct edition comics with their own entries, nor do they “break out” Canadian price variant comics.  So anybody up in Canada who decides to sell their childhood comic collection might very well pick up a recent Overstreet, open it up to the guide page for, say, Uncanny X-Men, to look up the value of, say, issue #207… and all they’ll see there in the guide is a single entry for the issue number… and then they’ll list their rare cover price variant newsstand comic for sale for “regular price”.

The variant for issue #207 happens to carry a 95 cent cover price, being very late in Marvel’s “window” (very close to the point where they merged the two newsstand batches into one and started putting both prices on them)… And perhaps because newsstand sales had trended down so much throughout the 1980’s, Canadian price variants later in the window can often be frustratingly difficult to find compared to variants early in the window.

I experienced this first hand with X-Men #207:  Between the time I started searching for a Near Mint copy of X-Men #207 and the time I actually landed one, it was years. It took me literally years to add this particular variant to my collection in the grade I was looking for.  Anyone who understands the rarity of such variants would ask a multiple to guide value for their rare variant copy; yet, just this past week the following variant was listed as a buy-it-now on eBay (and sold the same day):

By the asking price and the generic listing title and description (no mention of the word “newsstand” nor any mention of the variant cover price), it is clear that the seller of this particular book either did not know or did not notice that they owned the rare variant that their photo clearly showed… And so they priced it at a buy-it-now in line with the going rate for direct edition copies in the offered grade!

That is the take-away I hope that readers of my blog have reached upon reading about the different “classes” of CGC-recognized newsstand comics that I like to write about: that you are going to find these bargains out there in the marketplace today from within all the categories of variants I’ve highlighted on this blog, including $3.99 newsstand editions, $2.99 newsstand editions, and Type 1A price variants such as the ones from the 1980’s from Marvel and DC that were exclusive to newsstands in Toronto, Vancouver, Montreal, and other parts of Canada with newsstand distribution, where 75 cent variants (and 95 cent and $1.00 cover price variants) were distributed.

The take-away isn’t that those of us who study these variants are attempting to pinpoint the rarity percentage to a surgical level of precision (nobody is suggesting these are “2% on the nose“), but rather to learn about the underlying drivers of the rarity, and then using reasonable observations and estimates to understand and conclude that our collecting preference when going after any given issue where a newsstand edition or a rare cover price variant newsstand comic is a choice we can make, should be to choose the demonstrably-dramatically-more-rare variant — which, incredibly, can quite often be landed with a direct edition budget (plus a ton of patience and liberal use of eBay alerts).  See the forest, fellow collectors!