Last year, I introduced you to $3.99 Newsstand Edition comics as a new “class” of CGC-recognized cover price variants, ones with extremely low distribution as late modern newsstand exclusives.  This year, I’ve highlighted some individual example comics out of this “class” of cover price variants, and today’s example features a “Venomized” Wolverine, with an absolutely amazing cover by Leinil Francis Yu: New Avengers #35. Here it is side-by-side with a couple of the famous Venomized-cover-comics you already probably know about:

“Venomization” seems to really work for Marvel, fans seem to really love all of the various Venomized covers, and I wouldn’t be surprised if, hanging up somewhere in an office at Marvel, there’s a sign to remind staff members that fans love Venomization!

And some comics with Venomized characters (like pictured above) are worth quite a bit of money in the collector’s market for comic books — “Venom/Deadpool: What If #1” is one highly valued example you’ve probably heard of; and the Venomized Mary Jane variant of ASM #678 is another.  It sure seems that “Venomizing” characters, when done with truly spectacular cover artwork like these examples, really gives these comics “the it factor” that makes collectors want to own them — and when you then see the combination of that “it factor” with low numbers of copies in existence, then a supply/demand imbalance is created that can really drive up market value considerably.

Side note: I can’t think of any other comic book characters that have turned into a verb… I.e. while you can Venomize, I’ve never heard someone talk of Spider-man-izing or Wonder-woman-izing or Batman-izing, etc. So Venom is pretty unique in that respect, of existing as both a noun and a verb in the hobby. And I’m reminded of a great Calvin & Hobbes (below) about how “verbing weirds language”: 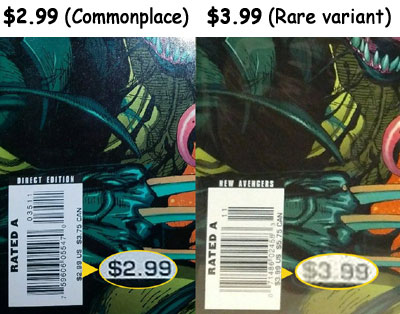 New Avengers #35 was published in December of 2007, and the $3.99 cover price copies were exclusive to newsstands (while direct editions carried a $2.99 cover price — by the way, any readers unfamiliar with the difference between direct edition and newsstand comics should pause here and first read the following: Comic Book Newsstand Editions: Understanding The Difference), so the way I approach probable rarity for the $3.99 cover price variant version of New Avengers #35 is to first look up the Comichron sales estimates for the issue (their estimate covers the direct edition copies ordered by comic shops in North America), and then, do some extrapolation from there, making use of nearby-year newsstand rarity estimates. [Although it is impossible to know issue-by-issue how many copies were precisely sold on newsstands, by applying the nearby-year Marvel-wide-estimate to the sales numbers for this issue, it gives us something to work with as an estimate for the probable number of variant copies sold]. As you can see, this was the #1 selling comic of its month, with estimated sales to comic shops of 111,363 copies:

With these nearby-to-the-publication-year newsstand rarity estimates in hand, we can now extrapolate out some estimates for $3.99 copies of New Avengers #35, using the sales estimates we saw earlier of 111,363 direct edition copies of the issue number sold to North American comic shops. That number from Comichron is an estimate, and only for distribution of direct edition copies to North American comics shops (Canada and the USA), which would mean the numbers exclude newsstand distribution (i.e. exclude our $3.99 copies). The numbers Comichron gives us would also exclude subscriptions, complimentary copies, and distribution outside of North America such as Diamond UK (this would all vary unpredictably depending on the issue but probably did not add more than 10% to Comichron’s number). So let’s first inflate Comichron’s number by 10% to account for some of these variables and make our estimates more conservative — that takes us to ~122,500 copies.

From there, we can extrapolate out a likely newsstand rarity range: by using Rozanski’s 2% newsstand (98% direct edition) figure on the low end (this being the 2005 estimate), and for the high end we’ll go up to that estimate from all the way back in 2003, then if the sales of this particular issue followed those broad Marvel-wide newsstand rarity figures, we’d then get a range of ~2,500-5,500 copies of New Avengers #35 with a $3.99 cover price as our estimate, which is shockingly low in the context of other modern age comics…  As a specific point of contrast for context, the highly-valued “Venom/Deadpool: What If #1” had estimated sales of 17,609 direct edition copies to comic shops (dubbed “Scarce” by ComicsPriceGuide and very highly valued by collectors) — so that means by comparison, our $3.99 variant copies of New Avengers #35 are likely 3x to 7x more rare than the “scarce” direct edition copies of the highly-valued Venom/Deadpool: What If #1!  And I’ll stress the word “likely” and will repeat that there’s no way to really know precisely how many newsstand copies sold issue by issue (no such figures exist).  But applying these broad Marvel-wide estimates from 2003 and 2005 as nearby years, this extrapolation exercise gets us to extremely low numbers of variant copies likely sold for New Avengers #35 — keeping in mind all the while that with the book published late in 2007 there would be years of additional newsstand dwindling between the time of those newsstand rarity estimates we’ve used in this exercise, and the time New Avengers #35 was actually published — which arguably gives us a buffer of conservatism in this exercise. 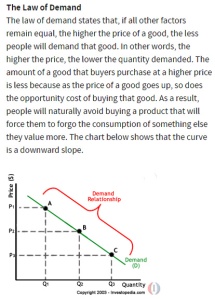 Another buffer of conservatism is how with New Avengers #35, the newsstand cover price at $3.99 was a full 33% higher than the direct edition cover price.  But earlier in 2007 the newsstand and direct edition prices were equal.  And Economics 101 teaches us that all else equal, a higher price for a product should mean a lower quantity sold.  So compared to the 2007-wide newsstand percentage, the particular newsstand copies priced 33% higher at $3.99 would likely have pulled down the average rarity for the year, i.e. selling at a lower newsstand percentage of each issue versus when both versions had still been $2.99 in cover price.

Furthermore, still another factor making this exercise likely to err on the side of conservative, is the fact that we’re merely talking about the original sales at time of distribution — remember, the original buyers of these comics on newsstands did not know they had just purchased a rare variant.  The typical newsstand buyer was a reader unconcerned about preservation of condition, assuming they kept their copy at all. And so layered on top of the low original distribution of the $3.99 cover price copies as a tiny percentage of the total sold for this issue, we also have that notorious newsstand destruction rate in play as well.  While collectors were mostly out there taking home and preserving the direct edition copies of this issue — the ones priced at $2.99 — we meanwhile likely saw huge numbers of the $3.99 cover price copies get tossed away or read to death.  The fact that the $3.99 cover price variant of this issue number was a newsstand exclusive is a highly interesting situation in the hobby indeed; the surviving count of these, especially survivors that remained in “CGC-worthy-condition” has got to be remarkably small indeed.

And one of the great things about CGC’s decision to “break out” $3.99 newsstand copies separately on census from their prevalent direct edition counterparts as distinct variants of the issue number, is that the count of surviving copies of each type that have passed through CGC’s doors will increment separately.  The prevalent direct edition copies will be separate and distinct from the rare $3.99 copies, which means the newsstand rarity percentage of surviving copies can self-express in the census data over the course of time.

And that, of course, is absolutely fantastic news for collectors who study rarity data and collect these rare newsstand-exclusive cover price variants, because all that extrapolation and number-crunching we did before is estimation, whereas the actual count of CGC census copies is a cold hard number of copies that actually survived and have actually been graded by CGC. Simply put: if you are a collector who wants to own a CGC-graded copy of the variant with the $3.99 cover price, then you can see precisely how many CGC graded copies are floating around out there by doing a census lookup!

Here below is an example CGC graded variant copy (note the variant notation “$3.99 Newsstand Edition” on the label): 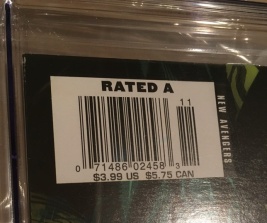 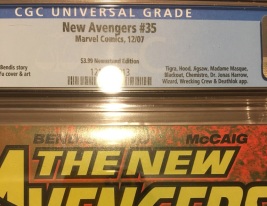 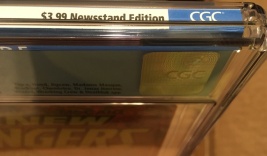 Related: Venomized Mary Jane (ASM #678 Variant)
And: Venom/Deadpool: What If? #1

One thought on “What If Venom Possessed Wolverine? New Avengers #35, $3.99 Newsstand Edition”