At the start of the year, I embarked on a project to put together and share lists of key comic books by year, and in the process I also separated out a few lists of variants confirmed to exist at CGC — such as this list of CGC-graded 35 cent price variants, and this list of CGC graded 1980’s Canadian price variants.

When I now look at the most recent census data snapshot from this week, I see that the list of 35 cent variants at CGC hasn’t changed since year-end (to be clear, I’m not talking about the copy count change, but rather the list of issues — the list of census entries)… and this makes sense, because it is a very “mature” class of variants that the hobby has paid attention to (and submitted to CGC) for many, many years.

That’s a 16% surge in the list of census entries at CGC for 1980’s price variants, in just a few short months!!

To be clear, this isn’t the number of copies of price variant comics that’s increased so much, this is the number of 1980’s price variant issues they’d never seen before at CGC as of year-end — census entries that weren’t previously there — but now are.  For most of these new ones among the 66, the submitter of the book now owns the only copy on record of the variant to date at CGC for that issue… which is pretty neat for those collectors to be able to boast!

What this surprising recent growth in the number of issues with confirmed price variants on record at CGC shows me, is just how “young” this entire “class” of variants really is in terms of the hobby paying attention to them and submitting them to CGC. To see a 16% surge in the number of issues with variants on record at CGC, in just a few months, is really quite something to witness… and I take it as a sign that collectors are indeed now waking up in a big way to the existence of these variants.

I’ll present the full list below, all of which are interesting to review because there’s usually a “reason why” behind any given submission, which can reflect personal tastes of the submitter but can also reveal collecting ideas and broad themes — for example continued growth in the Star Wars fan base, and excitement over the upcoming New Mutants movie, likely account for a good number of issues in those two titles showing up on the list.  So I think of this list as a good “hunting grounds” for collecting ideas… other collectors had the idea to submit these, so let’s see what they submitted! Before the full list, a couple of issues in particular that I found noteworthy and want to point out: 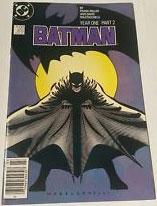 Very cool David Mazzucchelli cover on this one, and of course a Frank Miller story within the “Year 1” storyline. The cover price on variant copies is $1.00, and something to note about these $1.00 copies (and the 95 cent variants that preceded them) is how the indicia pages of these comics do not actually specify a per-issue price in Canadian dollars… in fact, the indicia does not spell out a per-issue price at all. So, we only know they are Canadian price variants by outside reference information, such as looking up the small-print-Canadian-price on the cover of direct edition copies. Related post: 95¢ and $1.00 DC Price Variants: How Do We Know What They Are?

A reader commented on a past post, that among very-hard-to-find Canadian price variant examples are the “Ghost Rider 75 cent variants (near the end of the series run, and its popularity plummeted, hence lower print runs on all Ghost Rider variants); this holds especially true to the very very low print runs of 75 cent G.R. issues.” For issue #75, I notice that this issue marks the 1st appearance of Steel Wind.  Perhaps interest in this first character appearance prompted the collector to hunt down and then submit this variant.

There’s more first appearance credits among the list of 66 as well, including Daredevil 232 (1st Nuke) and Fantastic Four 270 (1st full Terminus). Without further ado, the full list below. And by the way, I’ll have an update like this for another Newsstand-Exclusive “class” of variants as well in the near future, $3.99 Newsstand Editions.   (Special thanks to Greg Holland whose great research website made this page possible to assemble).

Canadian Price Variants Now Confirmed At CGC, That Were’t There At Year-End:

And here’s the prior list of CGC graded 1980’s Canadian price variants from back in January.

9 thoughts on “66 New Canadian Price Variants Confirmed at CGC Since Year-End, a 16% Increase”