Hulk #1 is considered by Marvel as one of their “Greatest Comics” as you can see by the title of this later  reprint.

Hulk (2008) is an interesting title for cover price variant collectors to look at, with the title beginning its run during a cover price variant “window” at Marvel — newsstand copies at this time had a cover price of $3.99 while direct edition copies were priced at $2.99 (this being a broad phenomenon for all titles, not just Hulk).

CGC recognizes $3.99 newsstand cover price variants separately on census.  A 2016 submission of some newsstand comics from the “Doc Collection” contained members of this price variant “class” of comics, prompting CGC to consider how to treat this entire “class” — and their decision was to “break them out” as variants.  CGC will label them “$3.99 Newsstand Edition” and that is the name of the entry you will see in census look-ups when these price variant copies appear on the census.

CGC denotes these cover price variants with “$3.99 Newsstand Edition” on the census.

Here below are side-by-side copies of Hulk #1 where I’ve enlarged the UPC codes to show you how the direct edition copy has a $2.99 cover price, while the newsstand edition copy is priced 33% higher (a full dollar more), at $3.99.  [Side note: in past price variant windows the percentage increase was a lot less… 35 cent variants, for example, were only a 16.7% price increase from the regular 30 cents, and in 1982 the introduction of 75 cent variants represented a 25% higher cover price over the regular 60 cent price of that time.] 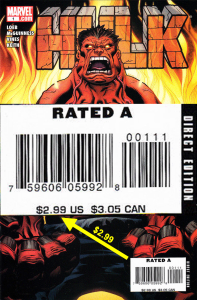 The #1 issue contains the first appearance of Red Hulk:

As of this writing, the $3.99 Newsstand Edition does not appear on the CGC census yet.  I checked Overstreet, and there is no mention of it; I also checked the popular online price guide ComicsPriceGuide.com, and I do not see it listed there either. 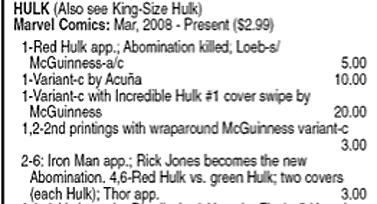 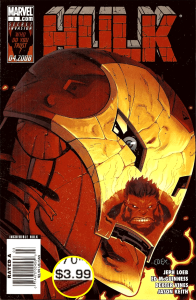 This retailer incentive variant was restricted to 3,000 copies… but look for it in the marketplace and compare the observed rarity to that of the $3.99 Newsstand Edition for an interesting comparison.

According to ComicsPriceGuide.com, that retailer incentive variant version was restricted to 3,000 copies and they value it at $20 in Near Mint (NM) condition. What’s interesting is to compare the difficulty of find that one, to the $3.99 newsstand edition of #2 — part of the driver of the scarcity of the $3.99 copies is that the small newsstand count was mostly sold to readers as opposed to collectors, and therefore would be expected to have a vastly different destruction rate (collectors taking home retailer incentive variant copies paid a good sum of money and knew immediately that their copy was a collectible to be preserved, not something to be opened up and read).

ComicsPriceGuide.com states that the retailer incentive variant pictured earlier was limited to 3,000 copies, and they value the comic at $20 in NM.

I’ve verified that newsstand copies for issues #3-8 are also priced at 3.99 (and their direct edition counterparts priced at 2.99), and #9 also likely has a cover price variant as well (that was the only one I couldn’t find to personally verify, but the direct edition copies are definitely still priced at 2.99 at that point).  For Hulk (2008), at issue #10, published April 2009, direct edition pricing “catches up” to $3.99 (in other words, both the newsstand and direct editions are then priced at the same $3.99 — but keep in mind that newsstand copies are still discernible, having a different UPC code on them, and still highly rare and quite collectible even when they are not price variants).

With the cover price difference having come to an end, at issue #10 (and on) CGC will not “break out” newsstand copies on the census based on current policy. [Current policy, as I best understand it, is to lump both versions together unless the newsstand comic is part of a cover price variant window, has a manufacturing difference, or has a UPC code “error” where the book is mis-identified as a different title.]

So by the time we get to issue #15 which contains the first appearance of Red She-Hulk (who appears on the cover of the subsequent issue, #16), there isn’t going to be a separate CGC census entry for newsstand copies. 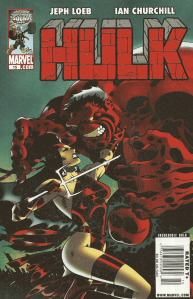 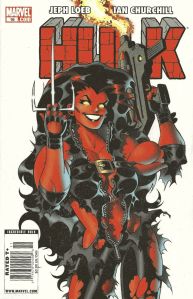 And then one more comic I want to mention is King-Size Hulk #1 — mentioned in Overstreet’s page for Hulk (2008) as “an also-see.”  It was a one-shot and takes place between issues #3 and #4… which means it was within the cover price variant window.  I found a newsstand copy, and interestingly it is priced a full 40% higher than its direct edition counterpart, at $6.99 versus the regular $4.99!  Once again Oversteet makes no mention of this cover price variant (nor does ComicsPriceGuide.com):

Overstreet’s page showing King-Size Hulk#1 pictures a direct edition copy priced at $4.99 and makes no mention of the existence of a $6.99 cover price variant.

Here is a side-by-side comparison showing a direct edition copy of King-Size Hulk #1 priced at $4.99, with the newsstand edition a full 40% higher at $6.99.