With newsstand copies of Amazing Spider-Man around the 600’s, there is quite an interesting and “post-worthy” phenomenon… one having to do with the UPC codes.  To set the stage:  Not all collectors know that the comics sold in comic shops were “direct edition” copies while meanwhile there was a second “variation” sent only to newsstands that can be told apart.  There is an interesting history there, which I covered in my post entitled Comic Book Newsstand Editions: Understanding The Difference.  But the “cliff notes” version of that history as relates to this post and the specific “phenomenon” I am about to go into, is to know that direct edition comics didn’t always have UPC codes on them the way current ones do…  But after a certain point they were added, because retailers were requesting them from publishers (with codes on them it would be much easier to scan items at check-out).  And so for what I’ll refer to as “late modern” comics, the distinction between the Direct Edition (non-returnable) copies, and the returnable newsstand ones, is pretty darn subtle at a glance.  In fact, I wonder how many readers will even notice there’s a difference before I go ahead and point it out?  Consider Amazing Spider-Man #599 below:

One of these is the “direct edition” version, the other is the “newsstand” version… Can you tell which is which?

Observant readers will notice there are actually several differences… (including another key difference — that the cover price is different — that I will delve into in future posts)…  But for this post I’m just going to talk about what appears on the side of the code box (for this issue the right-hand side):  “Amazing Spider-Man” for the ASM #599 copy at the left (the newsstand copy) and “Direct Edition” for the ASM #599 copy at the right.  Next, below, I’ll picture the subsequent issue, #600 (and this time for anyone who didn’t spot the words to look for, I’ll point them out with arrows):

As you can see, the title above the code for the newsstand copy of ASM #600 at the left identifies the comic as “Frndly Nbhd Spider-Man” (short for Friendly Neighborhood Spider-Man).  But this is Amazing Spider-Man #600 we’re looking at, not Friendly Neighborhood Spider-Man.  And this phenomenon is what I want to talk about in this post.  Now that you have seen the newsstand/direct-edition distinction, I’m just going to be looking at newsstand copies for the remainder of this post.  (And now that you know what we’re looking for, I’ll make the pictures smaller and easier to scroll through).  Let’s now look at a newsstand copy of issue #601, the next issue chronologically… 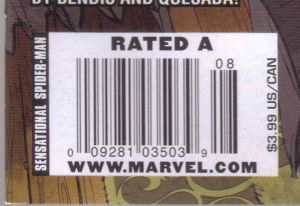 ASM #601 newsstand copy… The title reads “Sensational Spider-Man” to the left of the code box.

For this one, above, look at the left and you’ll see it identifies this comic as “Sensational Spider-Man” (but this is Amazing Spider-Man #601 we’re looking at).  And as a side note, from issue to issue the orientation of the codes is sometimes different and the title is sometimes on a different side of the box, but the important thing to notice is that these are three different UPC codes we’ve now seen, for newsstand copies of ASM #599, 600, and 601, being the codes for Amazing Spider-Man, Friendly Neighborhood Spider-Man, and Sensational Spider-Man.  Let’s see what’s on issue #602, shall we?  Here it is below:

“Amazing Spider-Man” on that one.  Let me now present a few more in succession: 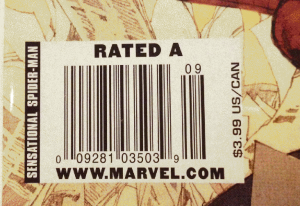 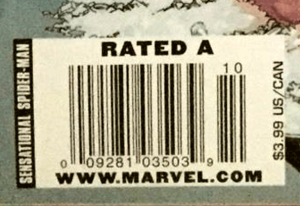 And now to make the “phenomenon” I’m pointing out here all the more clear, let me list out below all the newsstand ASM issues we’ve just looked at, and I will color code the names along the UPC codes as I list them to make crystal clear what’s going on here:

Do you see the pattern emerging?  Marvel is “cycling” these three different codes, alternating them in a predictable pattern.   Exactly how far back this goes (and how far forward) is another question…  one that is not easily answered because these newsstand copies are so incredibly difficult to find, so to “confirm” each and every issue with a picture is not something I will even bother to attempt.  But if this pattern holds, we should be able to extrapolate it backwards and forwards, and make a prediction about which code would be on which issue.  I will do that now, backwards to issue #579 (where I have a picture and can confirm) and forward to issue #616 (where I also have a picture and can confirm).  Here is the extrapolated list, with my confirmed examples from above in bold and my guesses (all based on the established pattern) in italics:

So let’s see if these predictions hold…  We guessed going backwards, based on the pattern, that ASM #579 would have the Friendly Neighborhood Spider-Man code.  Does it?  Here it is:

It does!  We also guessed going forwards, based on the pattern, that ASM #616 would have the Sensational Spider-Man code.  Does it?  Here it is:

It does!  Readers may be wondering at this point, does any of this matter?  Or is it just an interesting bit of trivia?  The answer is developing and I will be posting more about this in the future, but it is fairly clear to me that yes it matters [8/31/2016 update: it absolutely matters… please read Newsstand Variants, $3.99 Newsstand Editions, and The Doc Collection].  One reason it seemed to matter: the distribution was different depending on the code.  I know this because of “The Doc Collection” (which too will be the topic of a future post).  This collection, quite possibly the largest late modern newsstand collection in existence, is in the process of being sold off, at auction, one comic at a time.  But a very interesting pattern emerged in the Amazing Spider-Man run… this collection was missing every third issue.  It wasn’t that the collector “held back” every third issue from being auctioned, they simply never bought it in the first place.  And it wasn’t that it was there on the newsstand but they purposely skipped buying it, but rather, the store this collector bought their comics from (a drugstore) didn’t get them.  What’s the same about those missed copies?  They were the ones with the Sensational Spider-Man codes.  The store simply wasn’t distributed any of the ASM copies with Sensational on them!  A pretty fascinating phenomenon, wouldn’t you agree?  And it reminds me of a Jim Shooter quote:

“The newsstand cast a wide net. It funneled wannabe collectors into the comics shops. In a way, the spotty, unreliable, inconsistent nature of newsstand distribution was a good thing, because someone who just had to have every issue was more or less forced to seek out a comics shop.”  — Jim Shooter

Spotty… inconsistent…  Definitely describes this situation where the largest late modern newsstand collection out there, covering 50,000 newsstand comics, missed every third Amazing Spider-Man issue.  The ones with the Sensational Spider-Man code on them… which traces back to this phenomenon where Marvel “cycled” these three different codes.

If you picture how a “typical” newsstand buyer (a reader) might react to this phenomenon — this “hole” in the story line — it might pretty much be what Jim Shooter said, i.e. this forced them into a comic shop to buy the issue they missed and see what happened in the story.  At that point, they might very well become a regular customer of the comic shop, finding it to be reliable and consistent.  Enough readers making this switch from newsstand purchases to comic shops, and you can start to see how it really snowballed to the point where by 2013, by Rozanski’s estimates, direct edition comics were a full 99% of the total sold by Marvel, meaning newsstand comics were a mere 1%.  Marvel actually shut down its newsstand sales to the last remaining bookstore outlets in 2013 and Marvel’s David Gabriel revealed that newsstand sales to all other newsstand outlets had ended two years prior (which would have been circa 2010-2011).   By Comichron’s estimates, industry-wide 2013 newsstand comic book sales were only $25 million versus comic store orders (direct edition) of $340 million — that’s 6.8% newsstand vs. direct edition at 93.2%.

No matter how you slice it up, it looks like that newsstand slice in later years is a single-digit percentage of the total… and then from there, newsstand comics also suffer the typical high destruction rate inflicted by readers, that newsstand comics are pretty much notorious for… making high grade survivors all the more rare.

There is such a lower percentage of these as to nearly make many of these late modern newsstand copies “effectively invisible.”  But CGC has decided to “break out” newsstand comics with UPC codes mis-identifying the comics as another title — which would be two out of three ASM’s in the period discussed in this post — and they have also decided to “break out” $3.99/$4.99 newsstand cover price variants, as separately recognized census variants.  This will mean that over the years as data is accumulated, we’ll be able to see the relative newsstand-vs-direct edition rarity numbers self-express in the census data for these later years of Marvel’s newsstand distribution.